Channel management might be the single biggest confusing and misunderstood topic I come across. Here are a number of the falsehoods I hear often:

I believe there is only one way to explain and clear up the confusion.

The reason for the confusion is the misunderstanding between the role a property management software (PMS) and a dedicated Channel Manager play in distribution.

The very first thing to understand is, not only can a PMS itself behave like a Channel Manager: it should always be your best and most important Channel Manager.

I am the single biggest proponent of a PMS connecting directly to the actual channel (without the need for an intermediary channel manager) whenever possible (with one exception, which I will cover later). However, in research for our upcoming Keystone Awards, I am starting to see a different actuality form on the horizon.

A PMS Is A Channel Manager In and Of Itself​

There is no better way to illustrate that a PMS is a Channel Manager than looking at the two photos below from one of my favourite PMS’s. This PMS behaves as the Channel Manager and not one of these integrations requires a third party Channel Manager. 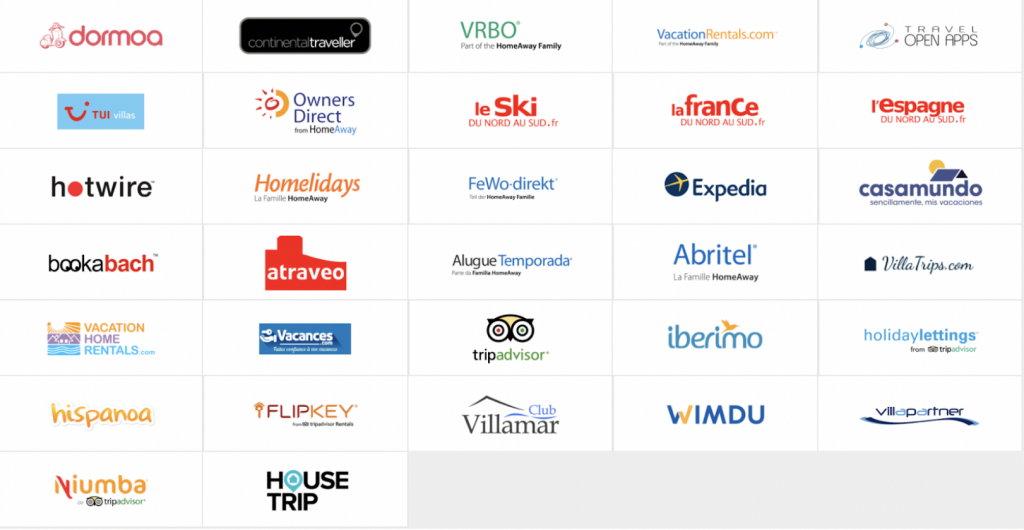 It might be easier to understand this concept by looking at EXHIBIT C and EXHIBIT D further down with the red indicator arrows.

Why? Because the world of distribution is too deep and nuanced for even the biggest PMS’s to embrace the cost-benefit of developing. After all, Channel Management companies are specialists – like Limited Edition vacation rentals – who do that one thing better than anyone else!

Rather, I believe the distribution of the future will be a blend/hybrid of distribution with both the PMS and multiple Channel Manager(s).

Further, having only one Channel Manager will put you at a competitive disadvantage. What I expect to see is most PMS’s will connect directly to the big prominent channels such as Airbnb, Vrbo, Booking.com, (there will be a few PMS’s with an integration with Google).

These PMS’s will ALSO integrate with selected niche and regional channels, all other distribution will go through Channel Managers.

(I did not include Expedia in this list because I expect the future of Expedia’s distribution (as it relates to vacation rentals) will go through the Vrbo platform.)

The photos below from one of the best PMS platforms illustrates what I think the future of distribution will look like. Notice the red arrows pointing to direct channel integration and external Channel Managers.

It might be easier to understand this concept by looking at EXHIBIT C and EXHIBIT D further down with the red indicator arrows. 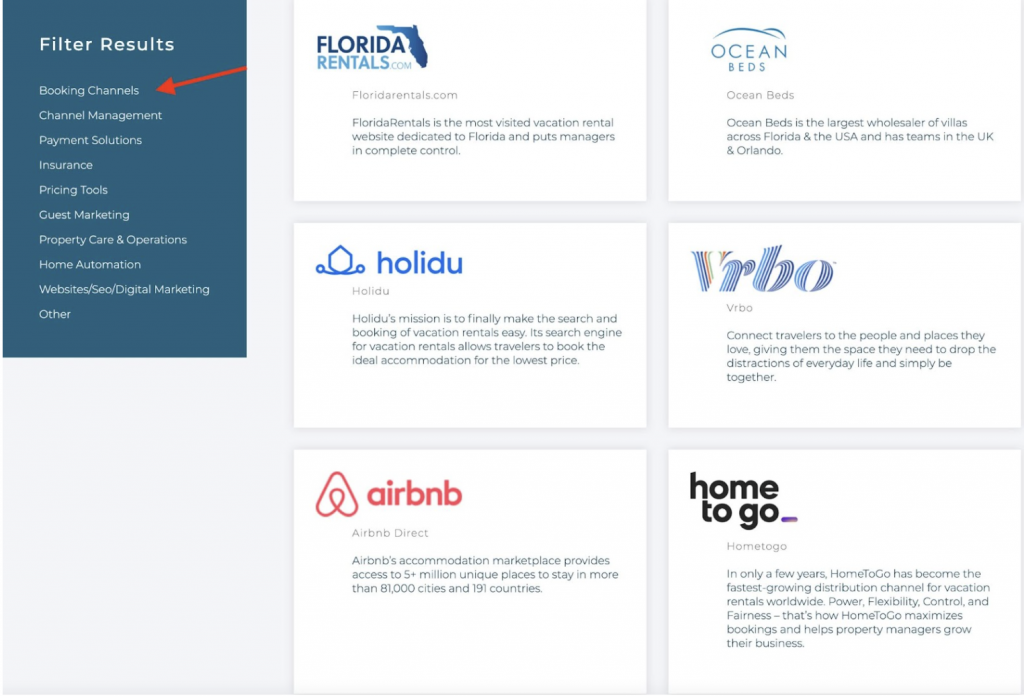 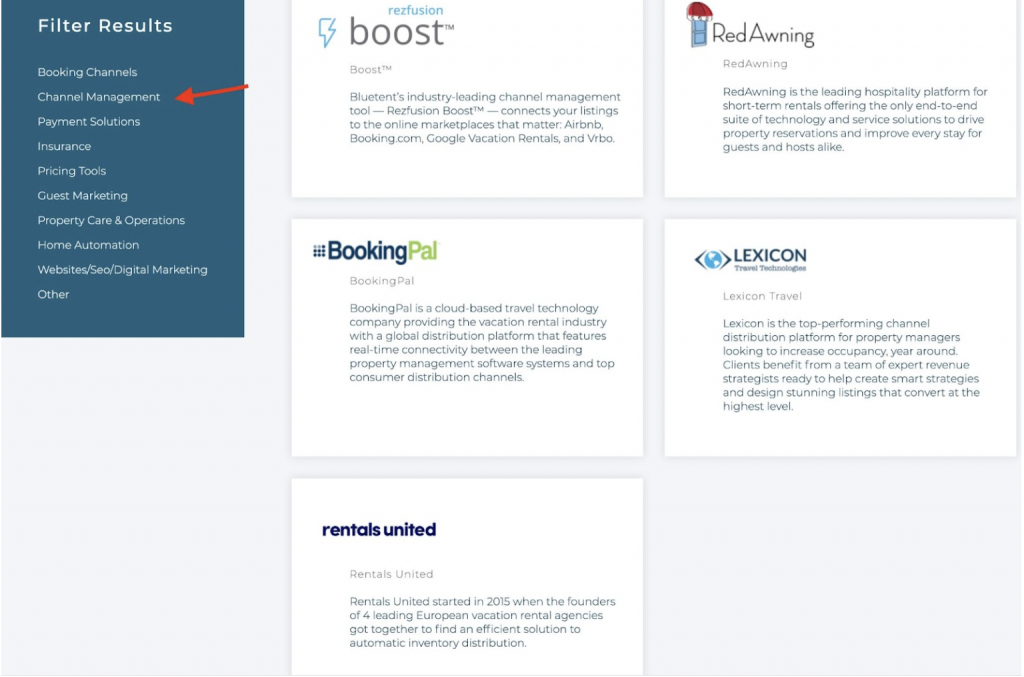 To say this another way, PMS’s of the future will not have BOTH direct connections to channels AND connections to multiple Channel Managers – a category which will boom based on industry tailwinds and the corresponding growth of niches.

When Not To Use A PMS Integration​

Sometimes, it’s actually better to utilize a Channel Manager over a direct integration between your PMS and the channel of choice.

Just because there is a direct connection between a PMS and a channel does not assure both a good and stable connection.

I have been a victim of this scenario with a previous PMS when the connection with Airbnb was very unstable but the connection with Vrbo was outstanding. There are no absolutes here. I was part of that PMS’ Facebook group where one member posted that when they switched their integration from a Channel Manager to a direct integration between their PMS their Booking.com reservations dropped 100%.

That is public knowledge.

Another example would be Vrbo’s rate rule that will allow new listings to publish special offers. When contemplating when it’s better to choose Channel Manager over direct integration, I encourage my consulting clients to ask “Can the PMS push our rate rule to the channel?”

Since channels are constantly updating their platforms and oftentimes a Channel Manager (the specialists in this craft) can react to a new API requirements much faster than a PMS. Whereas oftentimes with a PMS you have to wait for the next software release to update their API.

Now let’s talk about why a PMS integration with a single Channel Manager will put you at a competitive disadvantage.

(You guessed it, you want a PMS with integrations with multiple Channel Managers.)

What we are seeing now is massive distribution opportunities and ever-exclusive agreements with airline partners, hotel partners and soon to be announced a major credit card company.

Another very good reason to have several integrations between your PMS and Channel Managers is certain Channel Managers are more successful with some channels but certainly not all channels.

Remember: Not all Channel Managers have integrations with all available relevant channels. There can be huge opportunities lost without diversification.

This section of my article ALONE perfectly illustrates the complexity of distribution and the need for agility and putting yourself in a position to go in any direction necessary to succeed.

The Cost Of Distribution​

In a future article I will go into the details of why the costs of distribution need to be carefully calculated. But for the moment, the best advice I can share is to calculate out on average how much you’ll be paying for distribution on top of your baseline PMS costs. I’ve seen that threshold (too expensive) be different for everyone but the costs can mount fast.

When it comes to Channel Management fees there are basically two options. One, PPB (per per booking) or two, subscription, where you pay a fixed monthly fee regardless of how many or how few bookings are received. A similar way to illustrate this is to look at Vrbo’s rate plan. There are two options, one, subscription, two, pay per booking.

If your PMS has strong channel integration – ask yourself, does it make any sense to pay a Channel Manager a monthly subscription fee? The answer is likely no. This is where Pay Per Booking makes perfect sense.

If you adhere to the distribution rule of diversification through a PMS and multiple Channel Managers, I cannot think of too many scenarios in which subscription makes sense.

The Imminent Demise Of The Channel Manager​

One of the oldest and best PMS companies does not even have a direct integration with Airbnb and never will. The only way for their clients to get to Airbnb is through a Channel Manager.

The best PMS I have ever seen only connects directly with Airbnb and Vrbo, everything else goes through a Channel Manager.

Most present day PMS’s have liked nothing more than plug and play with distribution and the future of Channel Managers will be no exception.

The single most delusional concept I have ever heard since I joined this industry is the demise of the Channel Manager. It will never happen – in fact I believe it could easily happen in the opposite direction: the Channel Managers may become the gatekeepers of the future!

It started with the PMS facilitating clustered inventory, which is basically facilitating hotel-style inventory. The vacation rental sector is so big, so lucrative and there is so much opportunity, big time Channel Managers in the hotel sector will want in. There is a problem with hotel tech, however: it really does not work with vacation rentals.

I believe when hotel Channel Managers like Site Minder and CloudBeds enter our space (acquisitions of channel managers and PMS companies is very much in play) a new landscape will start to emerge.

Until then, ride the wave!

Terry didn’t feel like writing an ending so I will aim to conclude: an ever-thought-provoking predictions piece from someone who does an incredible amount of demos and private consulting sessions. If you haven’t watched his presentation The Tech Stack That Drives Direct Bookings, it’s like having Michael Jordan teach you how to shoot free throws.

My conclusion (thank you Terry for the chance to opine!) is that sniffing out opportunity happens best when we think differently: it rarely happens in the status quo.

Increasingly, we look to technology to make us more efficient and increase margins. And increasingly, we see vacation rental niches as the greatest untapped potential for growth.

If technology and niches had a baby, it would look like Terry’s article: a fresh and sort of weird new vision that connects the core of your business (a property management software) with the pockets of future guests who are using different search platforms depending on their interests and location.

So maybe the answer isn’t one or the other: maybe direct integrations and Channel Management aren’t a zero sum game. As the flow of vacation rental demand splinters into hundreds if not thousands of rivulets, each with their own peculiarities and charm, the best owners and managers stay agile by choosing a PMS with integrations to the big OTAs, but also a PMS who is comfortable with letting the Channel Managers be specialists at that craft.